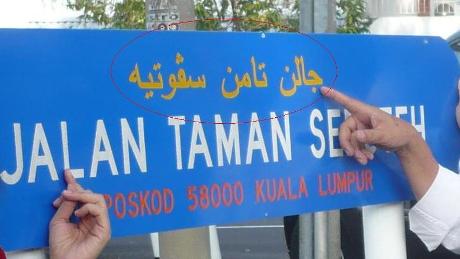 Malaysia is a multiracial country. So, naturally, it is also a multi-faith nation.

Since independence, Malaysia has struggled to find a balance between its original identity and the needs to blend with other Asian cultures. In particular, Chinese and Indians are the two main ethnicities among the minorities apart from Sikhs, Eurasian and others.

But lately, I’ve heard that the Jawi issue has gone out of proportion and becomes the front page topic amongst the local mainstream media. There could be hidden agendas (that makes the press give specific attention to this issue), but that doesn’t matter.

As a Malay, and of course a Muslim, I have every right to write an article about Jawi. . We mispronounced some Malay words after we used the Latin’s alphabets or Rumi (referring to the Romans). Such a famous example is in the peribahasa of “harapkan pagar, pagar makan padi” which later, we realised that it should be “harapkan pegar, pegar makan padi” referring to the bird called “pegar”.

Jawi is not a language per se, but a method of expressing ideas as used by the Nusantara Civilization since 600 years ago. The Jawi alphabets had existed since the pre-Islamic era when the Arabs wrote poems on leathers made from skins of camels or goats. Jawi has been there and will continue to remain on this planet as long as the Malays use them for whatever purpose they see fit.

But this article is not about explaining what Jawi is and why we need to use it as method of writing in our daily life. I also do not want to waste my time arguing about: why the Dong Jong (whatever the name of that association in Kajang is), declined to let students at Chinese vernacular schools study the three pages of Jawi? Although, they probably are so happy if free tickets were given to them to enjoy a holiday at Bali Island near Java.

The main question is for us to ask, why Malay language or Indonesian language now are not using Jawi as the medium of writing? Why didn’t the Malays push for this critical cultural identity when they had the chance to implement it during the formation of Malaysia after gaining independence? Pakistan at least got it, so why didn’t Malaysia who used Pakistan’s (or previously Indian) sample when drafting its constitution? Strange? No?

Well, I do not want to give you the explanation to the question above, because I have other reasons for posing this crucial question.

As Malaysia moves forward, this nation must have a collective identity to be identified by the international communities. But as the nations of the world are moving more and more towards the right, and lesser to the left or mid-centre, Malaysia has started to feel its pressure despite trying hard to deny that it is coming. Malaysia must find its true identity and then continue to move forward.

In doing so, Malaysians, regardless of race, must accept some apparent facts such as the rights of Malays, the position of Islam and many more. Malaysia, as it was born, bearing the name of ‘Malays’ as a country. And therefore, the native population of the land should remain as its core identity. However, other minorities should also be part of Malaysian identity by becoming the other main ingredients for the world’s best food called “Malaysia”. It is like eating Nasi Lemak, Laksa and Cendol, one must not forget that these food couldn’t become a tasty food without the right ingredients from places all over the world.

Therefore, to make it easy (for the government) to negotiate with Dong Jiao Zong (for a trivial matter about three pages of Jawi introduction), I propose for the government, under the Ministry of Culture, or even Home Affairs to call for: the time has come (for Malaysia) to change Bahasa Melayu’s medium of writing by using Jawi instead of Rumi.

Hence, from January 2020 onwards (or whichever suitable dates may be in the future), Bahasa Melayu shall be written only in Jawi and no longer in Rumi. Other languages will remain as it is, as long as the users are happy, and so be it for English, especially, because it is an international language, or medium of common communication with each other.

It will take some time for the implementation to take place, but at least within three years; the Malays will surely get used to this. If the non-Malays want to learn Bahasa Melayu, then they had no choice but to learn the writings of Jawi, similar to how we need to learn Chinese calligraphy for Mandarin, Kanji for Japanese or Latins (Rumi) for English.

I also hope that other countries within the Nusantara archipelago such as Brunei, Singapore and Indonesia could also go back and learn this writing medium, in ensuring that Jawi will not disappear from the minds and hearts, especially of the future generations of Nusantara people.

I know that this is almost impossible to achieve, but by bringing this idea even, to some extent could give the Dong Jiao Zhou some understandings of how much that they have gained from this beautiful country since its independence.

Then, probably, they would realise, how small-minded of them, asking the government not to teach their students, a mere three pages introduction of Jawi, which will not change their identity nor their religion, but hopefully, their intelligence and level of tolerance could be very much elevated.

God Willing and May God save us all.

Welcome to my Blog

The idea of this blog is to help any man out there who are happened to be a son, brother, husband, father and a friend. If you want to share your ideas, comments or feedback, please contact me personally.

Begin typing your search above and press return to search. Press Esc to cancel.